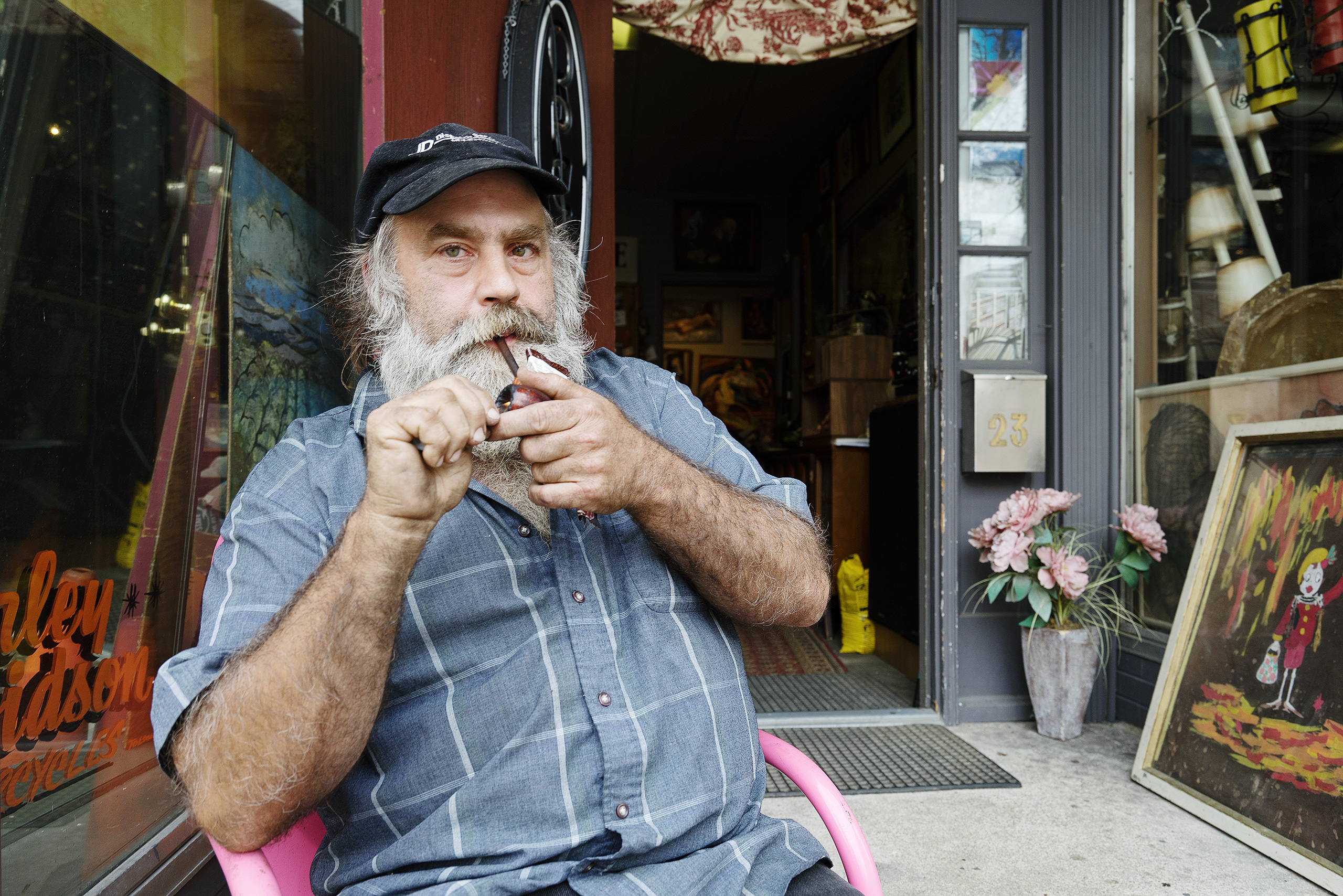 Matthias Ries:
Could you please tell us a little bit about yourself and your role in the Greyland Gallery and what the Gallery is about?

Todd Tolson:
Well, it started off down here about three years ago. I did a lot of collecting and Rocco [editor’s note: his business partner] was in here at first, so I helped to get it going with him to get it started. About eight months ago he just folded his hands a little bit and I just stepped in and took the space over, cause it’s a really accumulative business where you need space. You are able to find a lot of stuff but you are not able to sell as much as you get unless you just run it through auctions. In other words, you are able to accumulate a lot of stuff in a short period of time, but you have to be able to either save it or sell it off, you know, because it takes up too much of, you know, space. You either have to grow with what you get or sell off what you get in bulk and then you run it through auctions. Sometimes you get very little of what it’s worth, then other times you get three times more than what somethings worth.

Matthias Ries:
How did you get involved into this business?

Todd Tolson:
Basically how I got started in collecting would’ve been from my grandmother; from having a lot of things that was passed down through the family and she had stories behind everything and saved everything. You know, we had a big house – we got a thirty-room house up in Warren [editor’s note: Warren, OH is a small city located about 14 miles (23 km) North-West of Youngstown] so you were able to – actually, when some of the family died, you got their whole collections, there whole lives. You were able to move in stuff. Up in the attic of our house, when my great grandma moved in during the Great Depression she started rest home business. When I grew up – in the attic, everything was just like 1929; still in boxes, still packed away, still put up.
The third floor of our house was kind of blocked off. I come out of a family where we had enough room; where my grandparents lived downstairs and we lived upstairs and we were still holding the third floor and a basement. As a little, small kid there was always something to do. You had a room for this, you had a space to, you know, start of everything. How can you say that – not basically save it but it was passed down. You know what I mean, the stories were passed down, which is good because most generations now don’t know what anything is. I feel they’ve lost track of the past, they are living in boxes; just painted rooms with no room to grow. You are like a flower in a pot; if you’ve got more room then you are able to expand and grow and get bigger. If you are held to a small space you are kind of like confined, you know, then you got to get rid of this, you can’t have this, throw that out… That was never done years ago.

Todd Tolson is the co-owner of the Youngstown based Greyland Gallery, which has once been a stage for the art, fashion and music scene. Nowadays, the Greyland Gallery has turned once more into a a treasure trove balancing between a thrift store and a gallery.